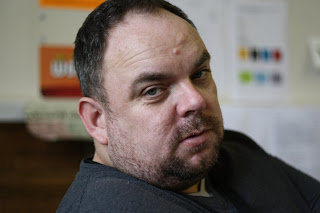 I'm still coming to terms with the sad death of my friend and colleague Andrew Reeves who died at the age of 43 a few weeks ago.  Although the same age (he's actually a few months older than me) I always thought of him as  younger for some reason.

Last year he named me as one of three people who had inspired him in his early years in the party (along with Dave Hodgson and Gerald Vernon-Jackson) and I regret that I never got round to thanking him for that comment which meant a lot to me at the time and means even more now.

I knew Andrew from early on in his involvement in the party when he was working hard to get activity going in Dartford and started attending training sessions run by the South East Lib Dems.  I liked him from the start, he had a keen intelligence, a willingness to learn, a down to earth attitude and a great sense of humour.  We came from similar 'ordinary' backgrounds and often chatted about how neither of us had expected, earlier in our lives, to end up in this sort of role.

Like many of the people who turn out to be the best campaigners he was initially unsure about his ability but he quickly started to get involved.

The first time I remember having a lot to do with him was during the organisation of a regional conference which, from my rather sketchy memory, was a great success socially and politically but a bit of a disaster financially.  (A combination not unknown to Andrew and many other campaigners!)

After some involvement as a volunteer Andrew started to think about working for the party, I think he saw it as a more interesting job than the catering work he was then doing.  He was still a little hesitant, but I and others encouraged him, and he soon started on a series of organiser roles.

From then on I was in regular touch with Andrew, by email, on the phone, at training events, meetings and conferences.  He rapidly developed from being one of the 'new' organisers to being one of the experienced that others would turn too for advice and support.

As the various speakers said yesterday (and thanks to Alistair Carmichael, Hilary Stephenson, Craig Ling, Fred Carver and Simon Hughes for great speeches which together summed up Andrew brilliantly and made me laugh a lot and cry a little) Andrew had an infectious enthusiasm and was loved by everyone who knew him.  As Craig and Fred made clear yesterday he was a supportive and encouraging mentor.

After his stints in different parts of London as an organiser (for Vince Cable, Simon Hughes and Lynne Featherstone - quite a combination!) he became one of two London Campaigns Officers alongside Chris Leaman, and a member of my team of COs covering London and the South East of England (I was always very lucky to have a strong team working for me).  As his line-manager it was great to see Andrew grow in this role, and in particular see him become a mentor to so many newer organisers.

As part of that job he went on the be the campaign manager for Brian Paddick's Mayoral Campaign in 2008.  That election was always going to be hard work, and it was made harder for Andrew by the fact that I managed to contract pneumonia over Christmas 2007 and was not able to give the support he deserved during the campaign.  We did keep in touch by email and phone and Andrew did as good a job as anyone could have done in the circumstances.

(It was interesting to hear Simon Hughes say yesterday that he had never seen Andrew lose his temper.  That is a credit to Andrew's professionalism as a campaigner.  As many of our former colleagues know we campaigners do our best not to explode in front of our candidates/MPs/local party executives at their latest idiocy - we hold it in and then go and ring one of our colleagues to let of steam instead!  I was often on the other end of the phone when Andrew did so.)

Andrew, feeling that he had done as much as he could in London and wanting a new challenge, then made the move to Scotland as their Director of Campaigns. It was clear from Alistair's comments yesterday the he established himself quickly and won activists over in what would turn out to be a challenging period for the Scottish Lib Dems.  As a result of that move, and of my resignation, I saw less of him during the last three years although we kept in touch and met up at conferences and training events.

Despite his undoubted talents I don't think Andrew himself ever really understood how well liked he was or how much his abilities were valued.  He probably always had his head down working to have time to.  (And my did he work - when I was his manager I had to force him to take at least some time off!).

I'm an agnostic when it comes to believing in any kind of afterlife, but Andrew's partner Roger is still regular posting on Andrew's Facebook page, so I'd like to hope Andrew was looking down on us yesterday with a combination of surprise and wry amusement.

So Andrew, assuming you are reading this, I miss you fella, I'm so glad I knew you, I hope you realise how much you meant to me and your large Lib Dem family.

And Roger - sorry I still didn't get to meet you - but I hope the service yesterday was some small comfort.
Posted by Liberal Neil at 11:23 am 1 comment:

Liberal Neil
Grew up in now Lib Dem held Redcar, Yorkshire. Spent six years at the University of Leicester including two sabattical years. Was on the NUS National Executive 1992-93. My working life has been with the Liberal Democrats including stints for LDYS, Oxford West & Abingdon Lib Dems, Chris Huhne MEP and the party's Campaigns Department. I have written a number of campaign manuals for the party, LDYS and ALDC and was Editor of ALDC's Goldmine for several years. I currently work for Oxford West & Abingdon Lib Dems. I am very lucky to have a beautiful wife and three lovely children. In my spare time I like going to rock festivals, watching Doctor Who, drinking real ale and eating curries.